About Us Our History

In October 1902, a group of sixteen civic minded residents met in John Dean’s general store (which today is home to the Greenlawn Hardware Company) to band together and organize a fire department to protect the growing village of Greenlawn. Several fires in the years preceding our founding showed the need for the sleepy hamlet to have a fire company like its neighbors in Huntington, Halesite, Cold Spring Harbor, Northport, and Centerport. The name decided upon was the COLUMBIA HOOK AND LADDER COMPANY NO. 1. Founding member William Schlim had been in the Huntington Fire Department, so he was elected Chief and John Dean was elected Foreman. Since everything had to be purchased by the men themselves (no tax money in those days), they only purchased two ladders and twelve leather buckets, some of which are on display today in the showcases in the lobby of Headquarters. This equipment was added to in 1903 with the purchase of a used hook and ladder truck (twenty years old at the time) from the Huntington Fire Department for $275. It was kept in the original firehouse, a barn behind the general store. A donated, used school bell sounded the first alarm, a grass fire, that was answered in November 1902. One of the local farmers would rush to the firehouse, hook up his horses to the hook and ladder and off to the fire they would go. The roof of the barn leaked so much that the buckets were always full of water and ready to be used. 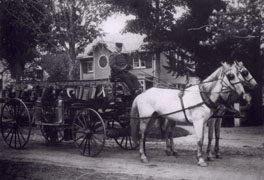 In 1905 the fire department decided that it was time to move out of John Dean’s barn into a building that they could call their own. Alexander Gardiner owned another barn on the west side of Gaines Avenue next to the Columbia Hotel, and despite its small size (55′ by 95′); the men thought it would be perfect. The time was right to make the move. After all, the men had the money. They had been holding dances in John Dean’s barn and the first dance alone netted a profit of $11.91. The treasury was growing, and after spending $10.00 each for uniforms, the men still had the $500.00 necessary to purchase the new building and begin its transformation into Greenlawn’s firehouse and social center. The main floor of the barn was made into a truck room for the horse drawn hook and ladder truck, and the roof was raised three feet to get more headroom on the second floor. The members did all of the work themselves and they were proud of their new firehouse. By 1906 the membership had grown to 25 members and the new firehouse had become a hub of activity. Many a gathering were being held around the pool table and piano housed in the recreation room. A charge was levied for use of the pool table to cover expenses such as cues and balls (take a look at the drawing that hangs over the magazine rack in the recreation room at the current headquarters if you get a chance). Things were moving along quite nicely. When electricity came to Greenlawn in 1907, the firehouse was wired for electric lights at a total cost of $19.80. Soon a committee was appointed to submit plans to enlarge the firehouse and add a theatre next to it. The “Opera House” was to be 72′ by 45′ and would be the largest entertainment center this side of Jamaica, Queens. $5,000 in bonds were issued at 5% interest return with the expectations that the revenue from the Opera House would cover the cost. The theatre could seat close to 500 people and many of the New York stage people that lived in nearby Centerport would donate stage sets and costumes to the new cultural center. Everything was falling into place until 2:30 AM on October 31, 1909 when a fire destroyed not only the firehouse with all the equipment, but also the new Opera House and the Columbia Hotel with its attached bowling alley. The members had to start all over again.

When the firehouse burned that night in 1909, all that was saved was 25 chairs and the piano. The building, all the fire equipment, and the contents of the Opera House, including all the scenery and costumes were gone. The loss in 1909 dollars was $8,500, big in those days, but there was some insurance, which amounted to $5,625. The money owed on the bonds and other debts amounted to $4,873.88. They were paid off and when all was over and done with, the Company had a grand total of $751.12 in the treasury, no firehouse and no equipment. It meant starting all over again. The members at that time were not easily discouraged, and immediately set out to find a new way to protect Greenlawn from fire. A hand drawn truck was borrowed from the Huntington Protection Engine Co. and was placed in service on November 4, 1909 while a plan to purchase new apparatus was formulated (Huntington’s truck would be returned on April 10, 1910). In the meantime, on December 2, 1909 a meeting was held in the home of George Gates and a committee was appointed to purchase a new horse drawn ladder for $1,000, delivery in 100 days. The ladder came with a full set of leather buckets and had a trolley foot bell under the driver’s seat (the bell was used at the Fair for many years after). Now what to do about a firehouse? On March 3, 1910 a committee was appointed to purchase property on which to build a new firehouse. Two sites were considered. David Smith on Central Avenue offered one lot as a donation. The other site was on Boulevard where a lot was for sale. The committee chose the Boulevard location, thinking that it was better suited for their purpose. A building committee was then set up and with plans and specifications developed, a new firehouse was constructed for $3,975. The building was completed and the first regular meeting was held on the first Thursday of October, 1911. The regular meetings have been held on the first Thursday of the month ever since. The bell from the bell tower was placed on top of the new building with a rope to sound alarms (that’s the bell that now sits in front of the dispatcher’s window at headquarters). The Columbia Hook and Ladder was back in business.

From the first meeting in 1911 the Columbia Hook & Ladder Company worked with great effort to carry the expenses of the their new building and with hard work and determination, the members began to raise enough money at their annual fair to wipe out a large part of the indebtedness. In 1918 many of the boys exchanged their blue fire department uniforms for khaki military uniforms. Fortunately, they all came back that time. With their comrades’ safe return and their debt nearly satisfied, in 1919 the members began to look toward the future. For the first time, a car was raffled off at the Fair. The black Model T Ford (they were all black in those days) was won by the Argyle Hose Company of the Babylon Fire Department, it would be the first of many vehicles won at our fair and a tradition that lives on today. The new firehouse, which was now the largest meeting place in town, was used as a Saturday movie house and hosted Sunday Catholic services and other special events. The firehouse became a gathering place, especially during the cold winter months. Outside the firehouse, the winter months offered some well-deserved recreation for the members of the department and the community. The most popular outdoor sports were ice skating on the areas’ many ponds and sledding on the sloping fields and roads. The Columbia Hook & Ladder Co. and other organizations held competitive bobsled races on Main Street in Huntington Village. The course started on Cold Spring Hill on the west side of town, went through the village, and ended just short of the Old First Church. Columbia H&L had a 20-man bobsled that was hand carved out of a chestnut pole by member Mike Freres Sr. He was a carpenter by trade and built many houses in Greenlawn. The sled was widely considered as the fastest in the town, winning many times. The popular sport came to an end when one of the other teams had a serious accident that resulted in the death of one of the riders. 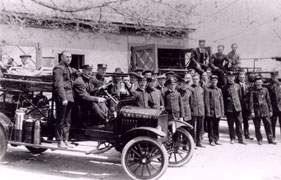 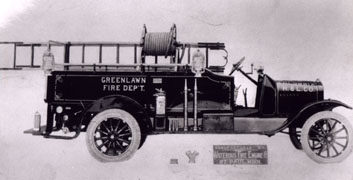 On January 8, 1920 the Columbia Hook & Ladder purchased their first motorized apparatus, a Model T Ford with electric lights and a self-starter. It had two 50-gallon chemical tanks (soda and acid) with 50 feet of rubber hose and two nickel-plated kerosene lanterns. Ford did not make fire trucks, so the American LaFrance Company did the work for the cost of $2,100. This valuable piece of GFD history is currently being brought back to life by member Lee Moran. Columbia Hook and Ladder now had a horse drawn ladder truck and a 50-gallon Model T Chemical truck, but fires were getting bigger and it was becoming clear that more equipment was needed. The fair was expanding and making more money every year. In 1921 over $4,700 was made and more money had to be spent for fire equipment. First an electric siren was purchased to replace the bell in the tower, a vast improvement in sounding alarms. In January of 1922 it was decided to purchase a pumper. Up to now fires had to be put out with 50 gallons of water on the chemical truck, but with the growth of population and the building up of Greenlawn, the firemen needed pumping capacity so that they could put more water on what were now much larger fires. A contract was given to the Waterous Fire Engine Company of St. Paul Minnesota for a 1922 Ford Model T pumper fitted with a Babcock rear mount pump, a hand-powered siren (on display in the case at Headquarters), electric lights, electric self-starter, two kerosene lanterns and the famous NON-SKID tires mounted on removable rims – all this for a mere $3,346.50. It remained in service until 1932 when it was given to the Hicksville Fire Department, which used the pump on their tournament truck. (The Model T, which stands on display in Headquarters, is an exact copy of this truck and thanks to member Lee Moran we can see with this magnificent piece of history…what our past members had to work with.)

In August 1922 a benevolent fund was started for the benefit of members who might be in need of financial help in the event of injury or sickness. This is carried on today and has helped many in the 83 years of its existence. Eventually, it was decided that horses were too slow, so in March 1925 the horse drawn hook and ladder body was put on a Graham Brothers truck chassis. The work was done in Riverhead for the sum of $2,635. Our first motorized hook and ladder truck was ready to take the road. By 1926 our fire department was really growing up, and in April of that year the Ladies Auxiliary was formed. 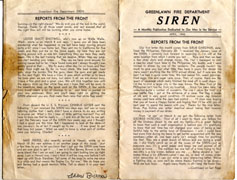 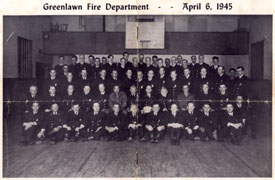 Greenlawn’s growth after the Second World War saw farms give way to developments like the Poet’s, Fountainville, and Robin Park. The Fire Department expanded as well, having outgrown the original truckroom; a modern, three-bay addition was put into service in 1962. To better serve the entire community, Station No.1 was constructed on Little Plains Road. It was dedicated and placed in service in 1971.

Our Department began ambulance service in 1962, providing first aid and transportation to Huntington Hospital. In the years to follow, our Rescue Squad has grown to include Emergency Medical Technicians, Critical Care Technicians, and Paramedics who are trained in the latest lifesaving techniques. 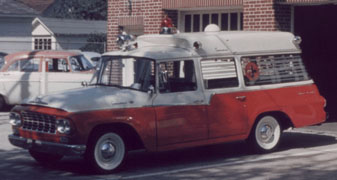 In 1994 the Department began a major renovation at its Boulevard headquarters, adding space for modern apparatus and larger meeting and training areas. Whether by school bell or electronic pager, for over 100 years our members have always answered the call. The horse-drawn wagon has given way to powerful engines and ladder trucks, but the dedication of the volunteers of the Greenlawn Fire Department remains the same, to answer the call for help, whatever and whenever the need.